On one hand, I can pay In Fifty Years We’ll All Be Chicks one of the best compliments you can pay a comedy book: While reading before bed, I kept waking up the person next to me because I was laughing. 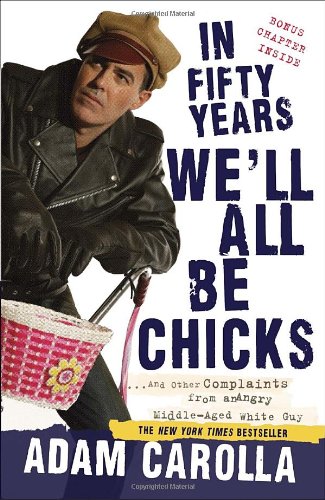 On the other hand, I might like Adam Carolla slightly less after reading this. For a book that, based on the title, is supposed to be manly or whatever, he sure comes off as a whiner. I know his frustration and outrage with the stupidity of the world makes up a large portion of his humor, but there’s something so unpleasant about his constant negativity combined with his gleeful know-it-all-ness that it gets hard to stand for an entire book. And while there were many parts that made me laugh, this also has some really weak material in a few spots. Some of the really straight forward observational humor mixed in here and there seemed so dated, I was waiting for a 1986 stand-up comic with Seinfeld hair to pop up and say “What is the deal with cell phones?” From memory, the chapters about food and sports were probably the worst offenders. They were probably just tacked on there to pad this thing up to a legit book length, so it makes sense that they contain some of the least funny stuff.

This probably has more new content than his second book, Not Taco Bell Material, which is more of straight autobiography containing many stories he’s already told on the radio. Regardless of that, I preferred Not Taco Bell Material as it seemed more honest and Carolla showed a little vulnerability that made me sympathize with him more. It also told a more satisfying story, while this was more like a bunch of magazine articles stuck together.