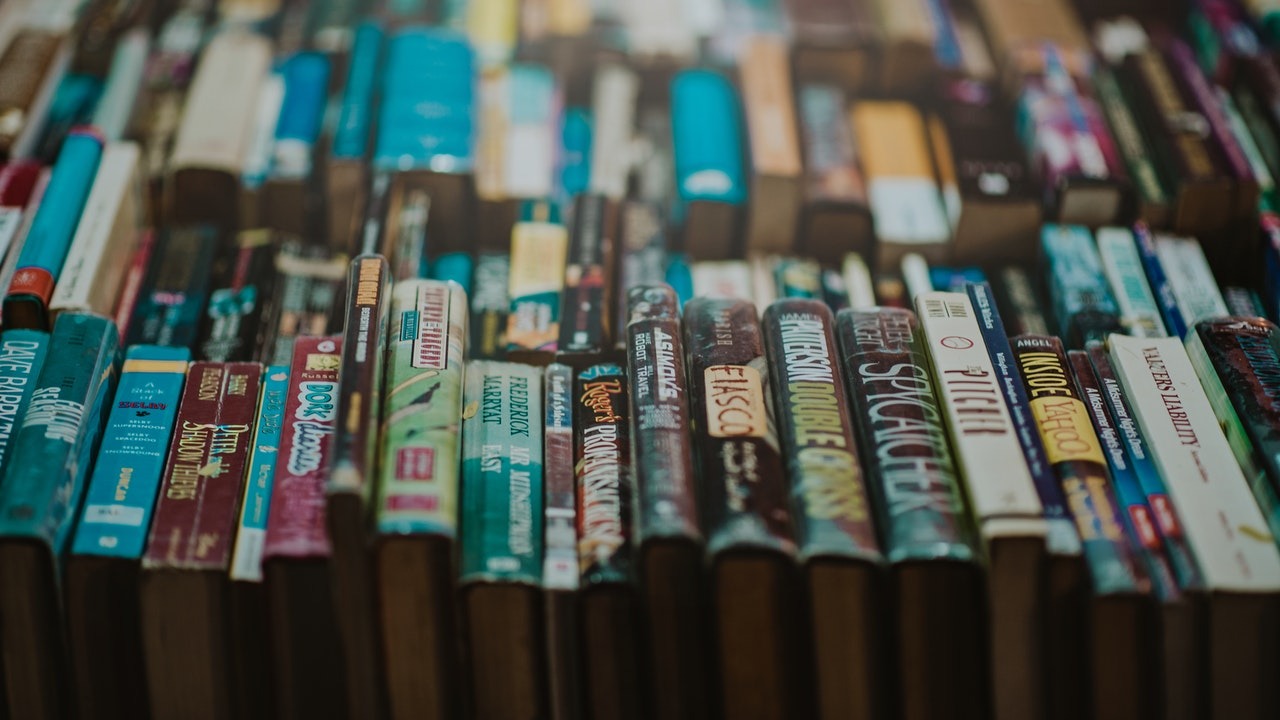 I’ve read a bunch of books so far this year, and it happens that I love nothing more than spreading the word about good reads. Out of 120 books or so, I’ve narrowed things to a list of 23 — one for each week we’ve endured so far in 2017.

(Lists are in no particular order.)

Four books that chilled me, thrilled me, and rocked me like a hurricane.

1. Rules of Prey by John Sandford – This book was recommended to me by Dennis Rader AKA the BTK killer. Not personally. He sent the book’s cover to the Wichita police in a big pack of creepy stuff. Weird guy. Not the most charismatic. But I’ll hand it to him, he was dead on about the book. It’s a great thriller in the Silence of the Lambs vein. It was so popular, in fact, that it spawned a series that is currently 29 books deep and counting. I’ve read four of the Prey books, and they keep getting better.

2. A Reason to Live by Matthew Iden – Marty Singer is a flawed, human protagonist — something of a rarity in the thriller world these days. This had a really good knife fight in the opening scene, too. I’ve always said that’s the fastest way to a reader’s heart – a nice sharp knife.

3. Whiskey Sour by J.A. Konrath – This is the first book in the Jack Daniels series, another set of serial killer thrillers. Konrath doesn’t mess around. It’s very quick and very entertaining with great dialogue that made me laugh.

4. The Girl in the Ice by Robert Bryndza – This was arguably the breakout book of 2016, at least in terms of kindle and audible. I can understand why. Rob Bryndza’s thriller opens with a gripping hook, and the tension just builds from there. It hits all the right notes until the final page. Very tough to put down.

Six books that made me laugh and laugh.

1. Odd Thomas by Dean Koontz – Funny and tragic with enough heart to choke a bodach — this is one of the most charming books I’ve ever read. I went into this thinking Dean Koontz was decent and came out a fan for life. Appreciate the man, I beg of you. Appreciate Dean Ray Koontz… or else.

2. Fat Vampire by Johnny B. Truant – Sharp, witty writing tells an oddball vampire tale that sinks its emotional hooks (and fangs, I guess) in by the end. I really enjoyed it, and I’m about to start the second book now.

3. Revenge of the Bloodslinger by eden Hudson – Blend up urban fantasy and cyberpunk, add a total dick main character, and garnish with hilarious jokes. I laughed out loud a bunch of times.

5. Bill the Vampire by Rick Gualtieri – When a geeky douche gets turned into a vampire, things get pretty funny and stay that way. Some reviewers have called it “The Big Bang Theory with vampires,” and I can see that, although I would probably express that notion by saying “The Big Fang Theory” instead. That’s just the way I choose to live my life.

6. Travels with Charley by John Steinbeck – At 58 years old, John Steinbeck drove a truck around America with his dog, Charley, and wrote about it. He was depressed and coming off a period of illness. Everyone advised against the trip. Steinbeck went anyway. The resulting book is full of sharp insights and amusing encounters with a wide variety of people, some of which may or may not have really happened. The homogenization of American culture is presaged here, among other things. Plus, Charley seems like a pretty cool dog. Steinbeck’s last major work is considered one of his most enchanting, and I’d say that’s so for good reason. I will probably read this again someday.

Two books that were perfect.

1. Before the Fall by Noah Hawley – Incredible, incredible book, and a weirdly perfect one for right now. I don’t want to give anything away other than to say that it’s really entertaining, thoughtful, and the finale literally gave me goosebumps with nothing more than a poignant exchange of dialogue. If I had to recommend just one book on the list, I think it’d be this one.

2. The Man in the High Castle by Philip K. Dick – If the last one was weirdly perfect, this one is perfectly weird. It’s an alternate history where the Axis powers won WWII, but its genius is in telling the story primarily through mundane points of view — regular people with limited to no ability to change the world. Eventually a real plot rises out of these slices of life, but the premise resonated with me so much more because of the way the story was told. I didn’t just go through the intellectual exercise of imagining a world after a Nazi victory, I felt its reality in my heart and gut, and it was terrifying and strange.

Two books that were almost perfect.

1. Pretty Girls by Karin Slaughter – Incredibly intricate and clever — the characters, the plotting, the details. Everything was striking, vivid and entertaining. And yet by the end I felt a little jerked around by the story. There were a couple things that bugged me more and more as the tale went on, I guess. I definitely want to read more Karin Slaughter, though. She’s a crazy awesome writer.

2. Duma Key by Stephen King – This might be King’s most literary effort. It’s mesmerizing, subtle, and I found it so charming and likable that I can forgive its flaw. Nonetheless that flaw remains — something in the climax didn’t feel quite right. One emotional misstep, and it probably only stuck out because the rest of the book is so good. I still rate this five stars and recommend it highly. I even look forward to reading it again someday.

Five books that made the hair on the back of my neck stand up.

1. The Breakers Series Box Set by Edward W. Robertson – If you like character driven post-apocalyptic tales, it doesn’t get any better than Robertson’s Breakers series. Seriously, I love these books. Plus, the box set featuring the first three books in the series is free!

2. Harvest Home by Thomas Tryon – This is a slow build, and many of the things Tryon did in the early 70’s have been copied to death. Even so, I will remember the climax of this book forever. There is something so strange and primal about the way it’s disturbing. I can’t stop thinking about it.

3. Skin by Patrick Logan – This is straight up, old school horror in the vein of old Stephen King or Clive Barker. A creepy voice comes calling people, beckoning them to touch some mysterious goo in the ground, and a heap of horrific deaths ensue. Violent. Disgusting. Gripping. And a lot of fun.

4. Carrion Comfort by Dan Simmons – Mind vampires, dude. Mind vampires. Dan Simmons is a great writer, and a unique, inspired storyteller. I must admit that I liked the opening quarter or so of Carrion Comfort better than the rest, but it was entertaining throughout — a feat considering it’s something like 400,000 words. Worth reading just for the first big fight scene that careens on and on and makes great use of the mind vampire premise.

5. Hannibal Rising by Thomas Harris – Everyone told me the last book in the Hannibal Lecter series sucked, so I didn’t get around to reading it until recently. I wound up liking it quite a bit. The plot is a bit minimalist compared to the twists and turns of Red Dragon or Silence of the Lambs. It’s more of a dark character study than a thriller, but Thomas Harris is such a good writer that he pulls it off quite well. This one got under my skin a bit, and as bad as prequels can be, this one did its universe justice, I think.

Two zombie books that wanted to eat my flesh.

1. Slow Burn Box Set by Bobby Adair – Dark, intense writing with great energy, and a story that delivers on the promise of the zombie genre. Fast paced and intense. I’m really looking forward to the rest of the series.

2. This Would be Paradise by N. D. Iverson – I predict that fans of Izzy and Erin from the Scattered and the Dead books will enjoy this one. What sets it apart from the rest of the zombie horde is the characters. Bailey is a strong yet vulnerable female protagonist you can really identify with it.

One book featuring a damn chupacabra.

1. Cursed: The Full Saga by Johnny B. Truant & Sean Platt – A Fugitive style story about a man on the run, except instead of merely being accused of a crime, Ricardo is accused of being a damn chupacabra. Which he is. So yeah, it’s awesome. The writing pulsates with a desperate sense of urgency and stuff.

1. Flashback by Dan Simmons – I flew through this book, was entertained, and it definitely made me think about a lot of things from a different perspective. On paper, it’s a science fiction novel about a dystopian future where America is ruined by a drug called flashback that allows people to relive their best memories over and over again. It’s the political side of this future that gets weird. A lot of people are offended by the ideas presented here. I don’t think I was, although I’ll admit that I’m not sure what to make of the author’s intent. As a story, I felt the setup for the ending was a little flimsy, but I still liked it. As a piece of culture, I’m not certain what to think.

Oh, no! The list is over, and it’s merely whet your appetite for literary talk? Fear not, ravenous reader. We are starting a kickass reading group on Facebook, and nothing would make us happier than talking books with you.

Click here to join The Incredible Tim McBain Reading Group (with L.T. Vargus, I guess). We’re going to talk about books and other things that are cool. It’s going to be like a non-stop party, except without drinking and with books. So more like a library, I guess!