Ever since reading Kera Emory’s debut novel, Your Name, In Fire, I have been anxiously awaiting the follow-up. Well, it’s finally here, and it doesn’t disappoint.

The year isn’t over yet, but I’m already certain this will remain one of my favorite reads of 2017. Your Name, In Blood has more story, more characterization, and more charisma in a single chapter than most books have in their entirety. 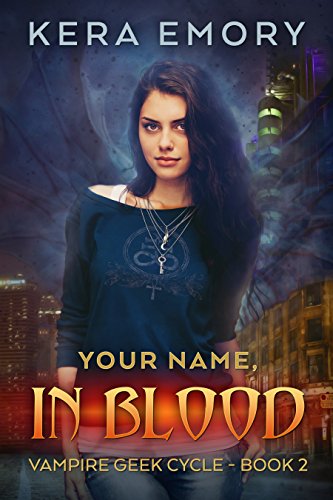 Just like the first book in the series, Your Name, In Blood sucked me right in (vampire pun intended) and never let go. I read it all in three or four sittings, and I probably would have finished it in one if I didn’t have work obligations nagging at me for the duration.

Emory’s writing has a way of casting a spell over the reader, making you desperate to read on to the next sentence, next paragraph, next page. Because you absolutely must know what’s going to happen next, damn it!

The characters are genuine in a way that I can’t help but think as I’m reading, “This must be based on a real person, it’s too detailed and feels too real to just be made up.” And on the other hand, I know as a writer that’s almost never the case. You might borrow little things from real people, but most real people aren’t half as interesting as the best-written characters in books.

So let’s talk characters for a moment.

First there’s John, living his ignorance-is-bliss lifestyle of expensive clothes, fancy cars, and one-night stands. When we meet him, his existence is pretty shallow and superficial. And yet you can empathize with his hesitation to start asking questions. If he starts picking at one thread, there’s no telling what else might start to unravel.

And then there’s Kelly, who might as well be the polar opposite of John: she’s ferociously curious about everything, and she won’t stop until she gets a satisfying answer. It’s a little scary how smart, clever, and analytical she is. She has a way of examining things that makes you wonder if she ever sleeps at night, or if she only sort of closes her eyes while her brain continues to whir along, worrying at the unanswered questions in her life.

A good writer might manage to create a main character that fits that feels-more-real-than-real-life criteria. Where Emory shines is that every. single. one. of her characters feels that way, from the returning protagonists from book one, Connor and Wendy, to the aging waitress at the local diner. On top of all that, they are the kind of characters I wish I could know in real life.

Lastly, I have to mention Emory’s knack for storytelling and structure. Both books had me looking toward the end, wondering how things would wrap up, coming up with my own theories… and both books had a final twist I hadn’t seen coming, but one that felt like the perfect, just-as-it-was-meant-to-be resolution to the story.

Check out Your Name, In Blood now for $0.99 on Amazon. And if you haven’t read Your Name, In Fire yet, you can grab it now for free!