When I was 4 years old, an evil book became the center of my universe. See, the cover was terrifying. (Even more terrifying than the one with Charles Manson’s green face on it, which I had made the mistake of making eye contact with and then backed out of the room in slow motion a few times.) This cover had what I believed to be the face of an actual dead person on it – the skin puckered in odd places, the eyes were just empty holes, and there were worms crawling on it. Maybe worse than worms. Maybe centipedes. It was hard to tell. I spent a lot of time gazing upon this evil paperback, wanting desperately to know all of its secrets, my skin crawling at how awful they might be. 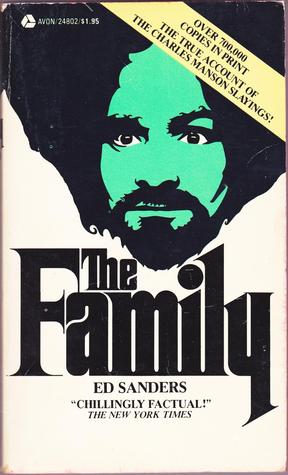 I had a problem, though. I couldn’t read. Well, technically I could read, but I knew I would need help to understand it. I was 4. Plus I was a little scared to venture into this kind of terror ride alone.

So I begged my Dad to read it to me. I’d grab it off the shelf and thrust it at him a lot. He never directly said no. He always said “in a minute” or “in a second.” I remember trying to figure out which of those was longer. He also said “maybe” a lot. What a dick! I might have been 4, but I knew when someone was giving me the run around.

I moved on to Plan B. Whenever he was reading, I’d go grab the evil book and dig in a little on my own, hoping he’d take pity on me and help me out. The text was confusing. I just read the first page over and over again. And this Dad guy was playing hardball. He wasn’t swayed by my ploy at all.

Worse, my Mom caught me reading the book and declared it evil (Duh!), which I guess meant it wasn’t appropriate for 4 year olds. She put it up on a really high shelf to keep it away from me.

So now what? Weeks went by like this. Nobody would read me this goddamn book, and it taunted me from up on high. I was screwed.

But still I was drawn to the book. I couldn’t stay away. I started scooting a chair from the dining room to get it down when my parents weren’t paying attention. I held it and looked upon the cover and dreamed of what sights it might show me.

I puzzled over the opening pages again and again, too. Something about dead people.

I told all of the kids I knew about it, hoping someone might have a cool dad that had read them this thing, and we could figure it all out. My friends were intrigued but offered no answers.

I couldn’t stop thinking about the book. I guess at some point, holding it and reading those first few pages was no longer enough. I cut open a paper bag from the grocery store and spread it out flat to make a large canvas, got out my paint set and started painting the opening lines on it:

“THE DEAD HAVE highways.
They run, unerring lines of ghost-trains, of dream-carriages, across the wasteland behind our lives, bearing an endless traffic of departed souls. Their thrum and throb can be heard in the broken places of the world, through cracks made by acts of cruelty, violence and depravity. Their freight, the wandering dead, can be glimpsed when the heart is close to bursting, and sights that should be hidden come plainly into view.”

At some point in the middle of my painting, my mom discovered me. She caught me red handed. Literally. My hands were covered in red paint. She was scared, but more than scared, she was furious. She said this book was evil (True!), that I shouldn’t be reading this kind of trash (False!), and that the high shelf wasn’t cutting it, so the book needed to be thrown out (Absolutely not!).

I don’t actually know what happened from there. Was the book thrown out? I don’t remember. Did I cry? Probably.

But time passed, and all of this faded away.

28 years later I decided to look up reviews of the book I was reading, and that terrifying cover of the original edition slapped me in the face. I was unwittingly reading the forgotten evil book from all those years before. Behold the much gazed upon dead face: 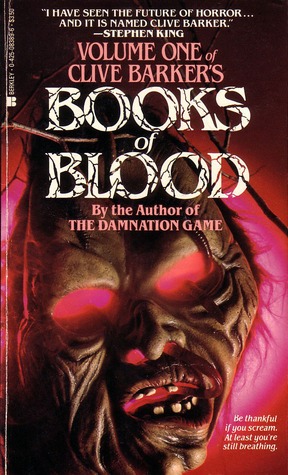 OK, so the cover is not terrifying at all. It’s a shitty Halloween mask with really fake worms on it. But all of those memories came flooding back. No one else in my family remembers any of this.

But it turns out the evil book was THE BOOKS OF BLOOD, volume 1 by Clive Barker. The Stephen King blurb on the front declares: “I have seen the future of horror, and his name is Clive Barker.” The praise is warranted. I enjoyed the book a lot. I just wish I hadn’t waited so long to read it.

4 thoughts on “Tim McBain vs. the Book of Pure Evil”